Coconut oil is great for many things like cooking (especially foods that need a higher heat since it starts as a solid), washing your face, moisturizing, a hair mask and supposedly as a deodorant (not sure about how that works).  It’s also a great moisturizer. One of the things I love about using it as a moisturizer is that I know for a fact I’m not putting any chemical additives on my skin at all by using coconut oil. It doesn’t have a strong odor (my migraine nose can’t stand strong scents), and it doesn’t leave a greasy feel either.

When I first bought coconut oil, it was really hot out so it was liquid in the glass bottle.  I poured some into a little spray bottle, kept it in the shower and happily used it when I needed to.

Then the temperature cooled.  And it solidified!  Now what? I had to come up with a solution to this so that I could still use the oil as a moisturizer immediately after a shower. We all know that’s the best time to put it on to help seal in some of the moisture from the shower, right?

This is what I came up with.  Start with the container of coconut oil (Find it where other oils are sold in your store): 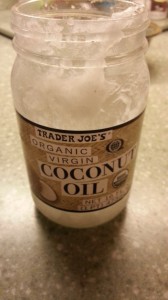 Then, scoop some out and put it in a glass measuring cup…. 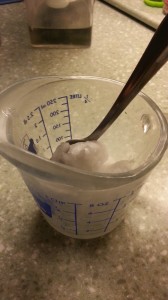 and heat for about 30 seconds so it becomes a liquid like this: 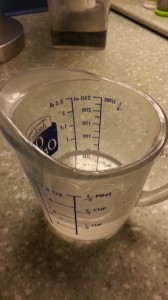 After it’s a liquid, you can pour it into a small container. If you fill it high enough, it should last for several days. Mine is a little spray bottle, but that’s just because that’s what I had on hand.  I keep the bottle in a small, plastic container in my shower. 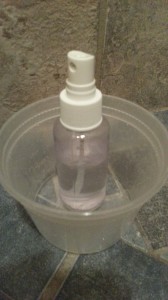 When I start the hot water in my shower, I put the container under the flow to fill with hot water.  By the time I am finishing my shower, there is enough melted coconut oil to then use as an after-shower moisturizer!  You can also run some through your hair. (But maybe not at the scalp because that could make your roots oily.)

Give it a try and let me know how it works for you!